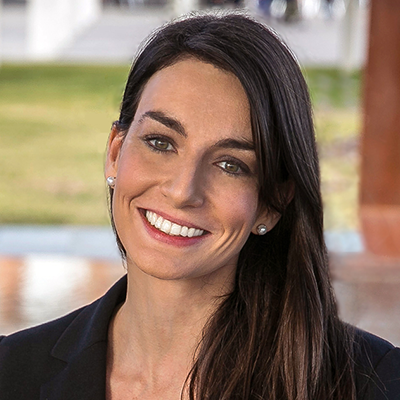 In this Making Leaders interview, we hear from Natalia Larrea Brito, Senior Affiliate Consultant at Euroconsult. Natalia completed a Master's in Aerospace Engineering from McGill University (Montreal, Canada) and a Bachelor's and Master's in Telecommunications Engineering from Universidad Alfonso X El Sabio (Madrid, Spain). She also holds a Diploma in Astronomy and Planetary Science from the Open University UK and is a graduate of the International Space University (ISU) SSP14 program, for which she received SSPI’s International Scholarship that year.

In her current role at  Euroconsult, she manages research activities and consulting missions for government and private organizations in the space sector. She focuses on the assessment of government programs, new technologies and the strategic analysis of industrial and commercial space markets with special focus on space exploration. She supports and advises established and developing space players, assessing new satellite programs, defining new space policies and conducting socio-economic studies. She has contributed to developing Euroconsult’s business practice on space exploration. During the past years, Natalia has also been a speaker and moderator at different international conferences, and she has contributed to multiple publications on space-related topics. She was chosen as one of SSPI's 20 Under 35 in 2019 and received a Promise Award in the same year. Learn more about Natalia.

Natalia Larrea Brito’s interview is also available as a podcast: