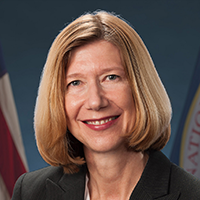 In this Making Leaders interview, we hear from Kathryn L. Lueders, Associate Administrator for Human Exploration and Operations Mission Directorate at NASA and one of the four inductees to the Space & Satellite Hall of Fame in 2021. For nearly thirty years Kathy has played an indispensable role in bringing the capabilities of the commercial space and satellite industry to NASA; serving human space exploration missions though new technology, practices of cost savings, and opening valuable opportunities for the industry.

Kathy began her career at NASA in 1992 as the Shuttle Orbital Maneuvering System and Reaction Control Systems Depot Manager for the White Sands Test Facility in New Mexico, after completing two Bachelor’s degrees in Science and Business Administration and a Masters of Science degree. Kathy moved to the International Space Station (ISS) Program next and served in a variety of managerial roles covering space station Logistics and Maintenance, Vehicle Systems Integration and Commercial Orbital Transportation Services Integration.