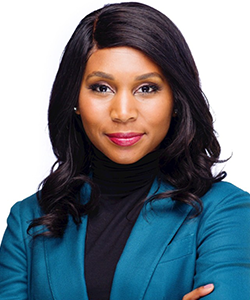 In this Making Leaders interview, we hear from Sydney Hamilton, Structures Stress Engineering Manager at The Boeing Company. Sydney began her career at Boeing in 2014 as a Structural Design Engineer, a role in which she supported projects like the 777 Automated Floor Drilling Equipment Elimination & Floor Redesign project and the 777X Folding Wing-Tip Mock-Up. She also worked in the Commercial Aircraft Operations Center as a Service Engineer before moving on to become a Mechanical Systems Engineer designing, analyzing and managing projects for additively manufactured parts for space and launch systems. Sydney next took on the position of Responsible Engineering Authority (REA) for satellite reflectors, in which she led a cross-functional team to develop reflectors for multiple commercial and government programs, demonstrating rapid problem-solving skills and the ability to consistently meet aggressive deadlines and cost targets. In her current role of Structures Stress Engineering Manager, she leads a high-performing team of 18 engineers that perform critical technical analyses for all 3 major Boeing Divisions: Boeing Commercial Airplanes (BCA), Boeing Defense, Space & Security (BDS) and Boeing Global Services (BGS). While Sydney’s primary organization within the company is in BCA, her leadership spans beyond BCA products to include BDS products such as the CST-100 Starliner reusable spacecraft capsule, Space Launch System and Wideband Global SATCOM.

Sydney has distinguished herself in many areas since joining Boeing. She became Manager of the Structural Analysis Team at Boeing just after her 30th birthday, a role in which she leads a team that provides structural analysis engineering for design, repairs and modifications for multiple Boeing programs, including satellites, rockets, manned spacecraft and commercial airplanes. As part of the Advance Design Engineering Additive Manufacturing Team, Sydney developed and maintained the largest database of additive manufacturing analyses at Boeing. The database is the first of its kind and provides access to complete and reviewed engineering work products, enabling other engineers to reuse and leverage existing analyses as part of ongoing work. Sydney received a Promise Award from SSPI in 2021, signifying her place as one of three leaders of the 2021 “20 Under 35” cohort. Learn more about Sydney.

Sydney Hamilton’s interview is also available as a podcast: