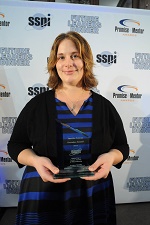 Jennifer Salmon joined SSL as a Test Verification Payload Engineer in 2006, just after graduating from California Polytechnic State University, San Luis Obispo. She demonstrated her talent as a leader in planning and coordinating investigative passive intermodulation testing of a very complicated antenna configuration that pushed the power limits of SSL’s test range. In this role, Jennifer helped multiple internal SSL organizations, including systems engineering, thermal engineering, and the test range team, work together to develop procedures that protected both personnel and equipment while performing a complex test never before attempted at spacecraft level. The results of this testing eventually culminated in the publication of a white paper which Jennifer co-authored. Her talent and dedication soon led to promotion to section manager for the Payload Systems Engineering group, where she managed and mentored numerous Payload Systems engineers through the design, analysis and definition of performance requirements on their payloads.

This end-to-end experience from design to test equipped her for her next step, which was promotion to her current position as Payload Manager.  She is one of the youngest individuals ever to serve Space Systems Loral in that role, yet already manages the payload for a high-profile, highly advanced Ka-band broadband multi-beam spacecraft with the highest capacity and largest number of components ever included in an SSL payload.  She has successfully led her team in optimizing the payload architecture, component selection and layout for best performance, and SSL’s customer has praised her leadership, technical knowledge and the performance of her team.  Jennifer also mentors mid-level and junior engineers to support their advancement inside SSL all while raising a newborn and toddler at home.