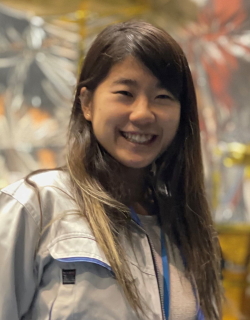 Mina joined the Japanese Aerospace Exploration Agency (JAXA) after completing her Bachelors and Masters degrees at Tohoku University, where she majored in Aerospace Engineering. In her current position, she works on JAXA’s ALOS-4 satellite, which uses cutting-edge Synthetic Aperture Radar (SAR) antenna and Automatic Identification System (AIS) antenna to monitor natural disasters. Mina’s particular responsibilities include the development of SAR and mechanical systems, such as heat and structure, for the satellite. She also works on the satellite system Assembly, Integration & Test (AIT) and various I/F operations, including H3 rockets. Mina is the youngest engineer on her team, due to the degree of both broad understanding and specialized knowledge required to work on the satellite, and she is also the only woman on the team. She has additional experience working on various phases of satellite projects with JAXA, such as the 3,000-kg satellite ALOS-4 in Phase D, the 65-kg micro-satellite ALE-1 in Phase B/C and the 35-kg nanosatellite QUEEN in Phase A.

While completing her Masters degree in Aerospace Engineering at Tohoku University, Mina researched thermal designs for 2 nanosatellites. One of the satellites, called ALE-1, was launched in 2019 and remains orbiting the Earth today, proving her thermal designs worked as intended. She published international conference papers on both satellites: “Evaluation of thermal analysis of launch and orbital environment of Micro-satellite ALE-1” at the International Astronautical Congress in 2018 and “Preliminary thermal design for the small satellite mission QUEEN” at the International Symposium on Space Technology and Science in 2019. Throughout her education and career, Mina has consistently sought to broaden her experience and horizons. She studied abroad multiple times, beginning with attending the University of California Davis in 2016, followed by the International Space University (ISU) in 2018 and Technische Universilät Berlin in 2019. She studied English, French and German and pushed herself to adapt to new places and cultures along the way.

Outside of work hours, Mina has been selected as a mentor for the Space4Women program in 2021, organized by the United Nations Office for Outer Space Affairs. She is the first Japanese national to be chosen as a mentor, and she will be working to empower female students to pursue STEM education in Russia, Australia and Malaysia as well. Mina gave a TEDx talk about the industry to increase public awareness around STEM education. She is currently working to improve science education and empowerment for Japanese youth interested in STEM by organizing nationwide workshops and events as one of the Global Shapers in Tokyo Japan.