It started with Iridium and Globalstar, the first satellite constellations. When Iridium began designing a 66-satellite system and Globalstar specified 48 spacecraft, the companies faced a completely new need: to standardize on a single design and produce it in quantity. Then in this century, O3B (now SES Networks) became the next company to build and launch a constellation. O3B was followed by OneWeb, and soon constellations were in development by Telesat, LeoSat, SpaceX, Boeing and other operators both long established and brand new.

These constellations confront the satellite business with the need to do what Henry Ford did a century earlier: develop the ability to mass-produce spacecraft with reliable high quality at an ever-decreasing cost based on continuous innovation. And like Ford – whose fast-growing business generated high demand for labor – the industry needs to attract a new generation of highly-skilled technicians able to meet the highest standards in a mass-production process.

This report examines how a group of companies on the Space Coast of Florida, centered on historic Cape Canaveral, tackled the challenge of creating a workforce for a space/aerospace/advanced manufacturing industry that has suddenly developed a much greater appetite for technical labor. In setting out on this journey, the group worked to solve an urgent business problem they shared. But the approach they took and the collaboration they forged is a model for other commercial space clusters across North America and around the world. It offers specific lessons that such clusters can use to solve their own pressing workforce problems cost-effectively and for the long term.

This report is sponsored by:

The Making Leaders report series is sponsored by: 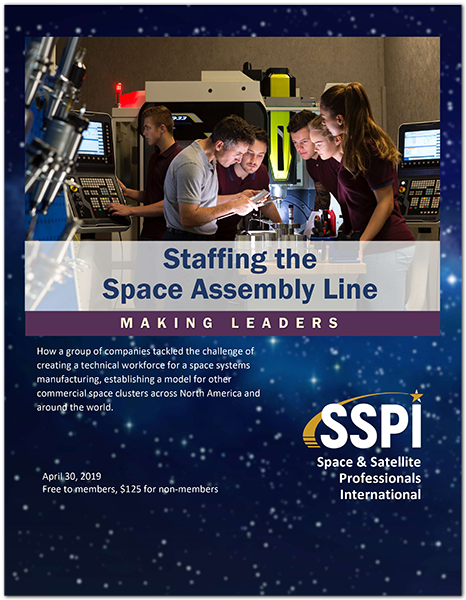 Purchase the report for US$125 using a major credit card by clicking on the report cover below. Or become a Member or Sponsor of SSPI today and receive the report - the fourth in a series - for free.