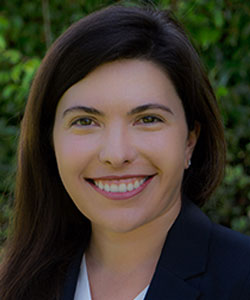 In a conversation with SSPI Executive Director Robert Bell, 2018 Promise Award Recipient Jillian Gorsuch talks about how she got her start in the industry and what it takes to succeed.

Jillian began her career at SSL through a Cooperative Education program in 2008 while working on her undergraduate degree in Mechanical Engineering at Cornell University. Upon graduating from Cornell with her Master’s Degree in 2011, she joined SSL full-time as a Responsible Mechanical Engineer in the RF Payload engineering department, where she worked on product design and delivery of more than 30 assemblies. Three years later, Jillian participated in SSL’s 18-month Rotation Program, during which she worked in the Mechanical Aerospace Ground Equipment department and the Solar Array department. After demonstrating particular talent in the Solar Array department, she took on the role of Solar Array R&D Project Manager. Click here to learn more about Jillian.