Making Leaders: How to Recruit College and University Students

One of the innovation leaders in the industry, SpaceX, now does most of its hiring from colleges and universities.  According to COO Gwynne Shotwell, it is the best way to find candidates with strong qualifications and the excitement and ambition to rise to impossible-seeming challenges.

In contrast, most companies in the industry prefer to hire from a pool of experienced candidates typically poached from competing firms, according to SSPI’s 2016 workforce study Launch Failure.  That has produced the age distribution shown here, in which those experienced workers ages 45-54 make up 42% of employees in the industry.  It is a practice whose limits are clear.  As one hiring manager told us, “we are all competing for the same talent, and there is only a limited amount of it to go around.”

There is no question that it is easier to hire veterans than it is to create internships then hire, onboard and train graduate and undergraduate students.  It is also less risky in the short term.  We reported in 2016 that, of the employees who voluntarily choose to leave their jobs in the industry, 23% do it within less than one year and 67% do it in the first five years.  But in the long term, it is obvious that a fast-moving technology industry needs a steady influx of people with different experiences, new kinds of expertise and a fundamentally different outlook.  When space and satellite was a slow-moving sector, it made sense to prioritize the hiring of people who would keep on doing what they had been doing for the past 20 years.  As the sector races into uncharted territory, its success will depend on turning the raw promise of new graduates into a never-ending stream of innovations.

For guidance in university recruiting, we thank a group of leaders within our industry, who shared their insights in a series of interviews conducted over the past six months.

The Making Leaders report series is sponsored by 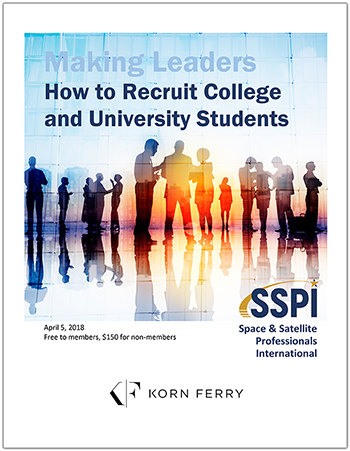 Purchase the report for US$150 using a major credit card by clicking on the report cover below. Or become a Member or Sponsor of SSPI today and receive the report - the second in a series - for free.