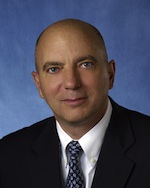 Tom Eaton, President of Harris CapRock, is recognized across the industry for a remarkable track record in positioning businesses for their next phase of growth.  When he became president of CapRock’s government services unit, he recognized the need to shift its focus from bandwidth brokerage to value-added services.  What followed was a series of major innovations that created the industry’s first military-grade satellite subscription service, made CapRock a leading provider of X-Band services, and turned the company into the world’s second largest buyer of satellite bandwidth – after its primary customer, the US government.

Most notable of all, however, is that the projects are not just business.  One created and sent care packages to military units deployed in Iraq and Afghanistan.  From a small beginning, the effort has grown into an ongoing project that has distributed over 100 care packages to deployed troops. For their efforts, the group has received thank you notes and pictures of operations from troops who have benefited from their effort.

Rising Stars is just one reflection of Tom’s continuing drive to identify and nurture talent within his company.  The company’s management is a testimony to his mentorship.  The company’s director of financial planning and analysis, Jay Kreider, was a 27-year-old MBA student when Tom recruited him.  The company’s President of Government Solutions, David Myers, is 39.  Strategic Growth Officer Jason Juranek is 37, and EVP and General Manager David Cavossa is 32.  Tom regards each as a CEO in training.  David Myers wrote of him that "He creates a collegial atmosphere that lets you speak your mind and ask questions that other managers might not be willing to entertain.  The result is a management team that is very comfortable with each other and harbors no agenda other than the team’s mutual success."

In 2008, SSPI named CapRock’s David Cavossa as one of its Promise Award winners.  Writing of Tom Eaton, David said, "He has been the most influential person in my career for the past 5 years... and has gone out of his way to put me in a position to test my skills and succeed through hard work. I owe my success in great part to him."