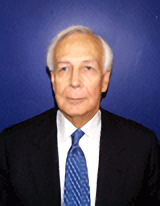 Clay T. Whitehead has been a seminal figure in the development of the satellite industry as a policymaker, advisor and business executive. After serving in the US Army and working for the Rand Corporation on national security and economic issues, Dr. Whitehead served as Special Assistant under President Nixon, with responsibility for NASA, the Atomic Energy Commission, the National Science Foundation, the FCC, and other areas of economic and regulatory policy. He led the development of US space policy following the Apollo program, including the decisions to build the space shuttle and space station.

Confirmed by the Senate as the first Director of the U.S. Office of Telecommunications Policy, Dr. Whitehead was responsible for Administration policy on broadcasting, cable, and telecommunications regulation as well as the Federal government’s own telecommunications activities. That role has led many to call him the “father of the Open Skies policy.”

After leaving government, Dr. Whitehead was a Visiting Fellow at Harvard and MIT. He then founded and was president of Hughes Communications, Inc., where he created the Galaxy business that became the model for satellite television distribution and broadcasting around the world. Subsequently, Dr. Whitehead founded the first private satellite business in Europe, now known as Astra, working with governments and industry in all major European countries in order to bring satellite-delivered television broadcasting to Europe for the first time.