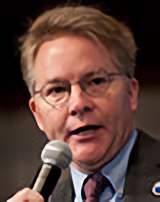 As a college student, David Thompson worked on the first Mars landing missions at the Jet Propulsion Laboratory and on Space Shuttle projects for NASA.  After serving in engineering and management positions at NASA and Hughes, he founded a new company in 1982 with Scott Webster and Bruce Ferguson, whom he had met at Harvard Business School. Armed with business school studies and an initial round of financing, the three set out to plan what they expected to be the first product of their new Orbital Sciences Corporation.  That product, the Transfer Orbit Stage for NASA, would not fly for another decade but, along the way, the company found itself focusing closer to home.  Orbital developed a plan to orbit a fleet of low-Earth orbit communications satellites to provide thin-route data services for industrial, transportation, energy and government applications.  When the company’s chief engineer, Dr. Antonio Elias, discovered that there was no cost-effective launch capability for such a fleet, he conceived what became the company’s signature product: the air-launched Pegasus rocket.  In1990, two decades before Sir Richard Branson would proudly call Virgin Galactic the “first” air-launched orbital vehicle, Pegasus completed its inaugural mission and Orbital Sciences went public.  It was the beginning of a dizzying set of innovations: the Orbcomm LEO communications and remote-sensing fleet, small-class GEO communications and earth observation satellites, scientific satellites for NASA, cargo resupply vehicles for the International Space Station – all in all, more than 1,000 satellites, launch vehicles and space systems.  Today’s Orbital is a $1.3 billion company with more than 3,600 employees that has recently completed a merger to become Orbital ATK, a $5 billion aerospace and defense systems company.  Leading the company from its earliest beginnings to the present, David has created enormous value while changing the face of the satellite industry.