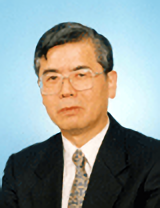 Dr. Takashi Iida has been perhaps the dominant force in the development of new satellite communications technology in Japan over the past decade. He was one of the primary designers of the Engineering Test Satellite 6 (ETS 6) that provided critical new knowledge with regard to millimeter wave and laser communications in space systems as well as made major contributions with regard to the COMETS experimental broadcast and mobile satellites. He is the initiator of the gigabit satellite project and now expanded to the WINDS satellite project in Japan as well as made contributions with regard to the ETS 5, ETS 8, and OICETS experimental satellite projects.

As Deputy Director General, Director General and now President of the Communications Research Lab (CRL) of Japan, Dr. Iida has been a key official in the development of Japan's telecommunications research agenda for over two decades. Most recently he has presided over the transition of CRL from being the research lab of the Ministry of Post Telecommunications to becoming an independent laboratory that performs research for the entire Japanese Government. Further he is heading the negotiations that involve the merger of CRL with the Telecommunications Advancement Organization (TAO) in order to create one of the largest basic and applied research organizations in the world. Dr. Iida has also played a key role in bringing expanded satellite communications to the South Pacific and other developing areas of the world.

Dr. Iida holds B.S., M.S. and Ph.D. degrees in electrical engineering from the University of Tokyo. He is the winner of the top communications award of the AIAA and is serving as the General Chairman of the AIAA International Communications Satellite Systems Conference 21 in Yokohama, Japan. He is also the founder of the AIAA Japan Forum, the author of numerous articles and two books in satellite communications. He was also the founder of the global workshops on Satellite Communications-Global Information Infrastructure (SC-GII) and also played a key role in the Quad Group that provided a forum for international discussions on satellite communications research between the U.S., Japan, Europe and Canada.