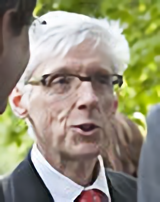 Dirk Breynaert founded Newtec in 1985 with fellow engineer Jean-Marie Maies.  For the company’s first ten years, it worked exclusively in R&D for the European Space Agency.  In 1994, when the European satellite market was deregulated, Newtec seized the opportunity to begin developing its own products and focused its efforts on the new Digital Video Broadcast (DVB) standard.  As company CEO, Dirk pushed for Newtec to develop and introduce innovations in DVB and also played a leadership role in the standards development process that led to DVB-S, DVB-S2, DVB-RCS and DVB-S2X.  Thanks to those innovations, more than 3 billion people across the world have access to the latest content, which is being transmitted at greater volumes and at lower cost than ever before.  Standardization made it possible for all TV set-top boxes and VSAT terminals to integrate cost-effective chipsets, which was critical to creating the flourishing satellite service markets of today. He and his team also combined existing technologies including DVB-S2 to create new modulation technologies, which power more than 130,000 satellite broadband terminals for SES and are bridging the digital divide in Russia, Africa, Latin America and the Philippines.  Dirk surrendered the CEO role in 2006 to become the company’s chief technology officer, and has worked since then to break through the throughput barriers that have limited the satellite industry for decades.  His biggest success to date was achieving 500 Mbps in tests with Eutelsat, Intelsat and Yahsat.  Inside Newtec, he is appreciated as much for his humility as for his technology passion.  For “Mr dB,” as he is known inside the company, the future is without limits.