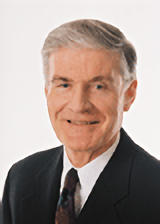 When Larry Boisvert became president of Telesat Canada in January 1993, the satellite operator was facing a number of severe challenges. He quickly moved to reinvent and reposition Telesat as an efficient, experienced and nimble player in a global market where national borders were fast becoming irrelevant.

Responding to that challenge, Mr. Boisvert began by restructuring the company to cut costs and withdraw from unprofitable lines of business. He then focused on growing the business and expanding its markets beyond Canada's borders, even though that meant opening the doors to domestic competition. Over the next decade, Telesat entered the North American direct broadcast satellite business in what would become one of the fastest-growing consumer markets in history. Mr. Boisvert also drove development of new satellites including Anik F2, the world's largest commercial satellite when it was launched in 2004, which was the first to fully commercialize the Ka frequency band.

Mr. Boisvert's leadership was evident not only in revamping and growing the company but in responding to setbacks. In early 1994, the company's flagship Anik E2 suffered a major systems failure due to a solar storm, which temporarily left the satellite unable to maintain earth coverage. Under his leadership,Telesat developed a revolutionary Ground Loop Attitude Control System that restored E2 to full operation and allowed the satellite to remain in service well beyond its projected lifespan.