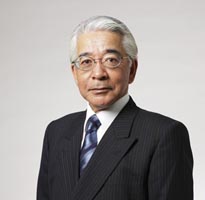 Mr. Akiyama has been instrumental in the satellite business in Japan since its inception.  Mr. Akiyama spent 29 years at ITOCHU Corporation during which time he helped sell the first commercial satellite ever launched for Japan, JCSAT-1, in 1989.  In 1999, he joined JSAT Corporation as Deputy General Manager, Sales & Marketing Group, then in 2001 he was appointed as Chairman and CEO of JSAT International Inc., the company’s Washington, DC-based subsidiary.  When JSAT was merged with SKY Perfect Communications in 2007, Mr. Akiyama became Chairman and Representative Director.

In 2008, he engineered the combination of the two largest satellite operators and DTH services in Asia, bringing together SKY Perfect JSAT and Space Communications Corporation into a single entity.  Today, he leads the largest satellite operator in the Asia-Pacific region — and the fifth largest fixed satellite services (FSS) provider in the world.  During his 11 years in SKY Perfect JSAT Group, Mr. Akiyama has contributed significantly to the expansion of satellite telecommunication service & multichannel pay TV broadcasting service in Asia.