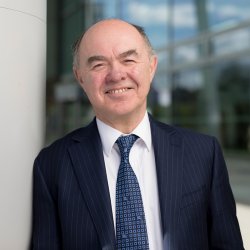 In a conversation with SSPI’s Robert Bell, Sir Martin Sweeting, Founder and Executive Chairman of Surrey Satellite Technology Ltd. (SSTL), talks about his early years,  the leadership lessons he learned, how he hires and what he has learned about leading a team bringing major innovations to market.

Sir Martin launched SSTL in 1985 to exploit the commercial potential of Surrey’s novel small satellites - initially with 4 employees and a capital of just £100. SSTL has grown now to 500 staff with an annual turnover of £100M and exports exceeding £700M. Sir Martin is also a Distinguished Professor at the University of Surrey, where he founded and chairs the Surrey Space Centre.

Under Sir Martin’s guidance, the Surrey Space Centre has similarly expanded to around 100 researchers working across a wide range of multi-disciplinary space topics, with very close links to both SSTL and ASTRIUM for the sponsorship and exploitation of its research - demonstrating the real synergy of academic research and commercial exploitation. In recognition of his pioneering work on cost-effective spacecraft engineering, Sir Martin was appointed OBE in 1996 and awarded a Knighthood in the Queen’s New Year’s Honours list in 2002.