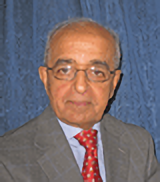 In the first phase of his career, D.K. Sachdev conducted pioneering work in India leading to the establishment of a company that, under his leadership, became one of India's largest telecommunications manufacturers and developed the nation's first indigeneous satellite antenna. He was presented with the Sarabhai award, one of the country's top engineering awards, for his work. Moving to Intelsat, he created and managed its first in-house research & development team from 1975 to 1985, which contributed innovations including multi-beam antennas, nickel-hydrogen batteries, ion thrusters and digital speech and video codecs. From 1985, he led engineering management for Intelsat spacecraft including the Intelsat Seven and Eight series and oversaw satellite specification, proposal analysis and recommendation for purchase of most of the satellite systems Intelsat acquired. It was during this period that he also provided the engineering support for NASA's successful 1994 recovery of the stranded Intelsat 603 satellite by the Space Shuttle.

After retiring from Intelsat in 1996, Mr. Sachdev was recruited by Worldspace, where he headed Engineering and Operations and established their two regions of operation in Africa and Asia. While Mr. Sachdev's association with WorldSpace was recognized by a 2003 Innovator’s Award from the Arthur Clarke Foundation, the extent of his leadership in the development of the XM Radio system is not well known. He was one of the few executives who persuaded WorldSpace to make the initial investments that made XM Satellite Radio possible. He put together a full engineering team for XM, developed its architecture and procured the spacecraft through a competition. He also led the development of the terrestrial repeater access basic technology.

In 2000, Mr. Sachdev again switched gears and went on to become a well-regarded teacher at George Mason University, where he instructs some 100 graduate engineers every year on how to develop and manage complex modern satellite-based systems. He is the author of three books including the new Success Stories in Satellite Systems, just published by AIAA.