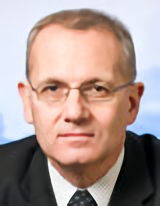 Mr. Le Gall started his satellite career nearly 30 years ago as a researcher for a French star-mapping mission.  Since then, he has presided over the creation of one commercial launch services company, Starsem, and the resurrection of another, Arianespace.  A French-Russian joint venture, Starsem introduced the Soyuz launch system to markets outside Russia.  As its chief executive, Mr. Le Gall oversaw the launch of 24 first-generation Globalstar mobile satellites and 14 replacement or second-generation satellites.

Mr. Le Gall was appointed to manage Arianespace when early launch failures of the new Ariane 5 vehicle threatened the company’s future.  He led the management team that returned Ariane 5 to flight and has completed 40 launches over eight years.  He also streamlined Arianespace's industrial supply chain and upgraded the Ariane 5’s lift capability from 8.7 to 9.4 metric tons of performance.  A signature achievement was the establishment, through covenants with the Russian and French governments, of the Western Hemisphere's first launch facility for the Soyuz rocket in French Guiana.