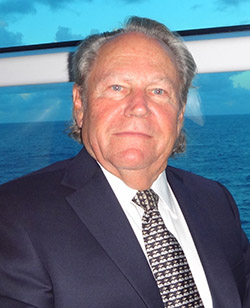 In a career spanning military service and entrepreneurship, Otto Hoernig has been a pioneering innovator in satellite communications and space based technologies.  In his early career, he was Chief of Scout Launch Operations at VAFB launching NASA, International Consortium and special mission DoD satellites including the Transit Navigational Satellites, predecessor to GPS. He was a significant contributor in the development and launch of Government agency and DoD satellites, including AFSATCOM and MILSTAR.  In the Department of Defense he was recognized as the top military satellite engineer, called on by the Secretary of Defense for advice on global and national satellite requirements.

After his retirement from the US Air Force as a Lieutenant Colonel, Hoernig began his second career with the American Satellite Company.  As vice president of space systems for ASC, he managed the process of deploying ASC's communications satellite system which featured the first encrypted / protected satellite command link.  His responsibilities included satellite and control center design and development, selection of launch vehicles, scheduling launches at Cape Canaveral and acceptance of the on-orbit spacecraft.  Otto was the designated ASC Payload Specialist aboard Space Shuttle STS-71 to help orbit ASC-2 and Skynet 4B, scheduled for launch in January 1987.  One year earlier, however, the explosion of the Challenger caused the mission to be cancelled. Otto testified before Congress on the urgent need to resume NASA's partnership with industry, which helped speed the return of the Shuttle to commercial operations.

When Contel acquired ASC, he became vice president for defense communication & networks for its Federal systems division, where he managed a $100 million line of business providing services to the Department of Defense and other agencies. He left Contel to become CEO of International Microspace long before smallsats became mainstream.  IMS focused on exploiting new technologies to downsize space systems and reduce costs.   The company was sold after Otto led the acquisition of a major contract.  Otto also negotiated the purchase of Telesat's Anik D2 and its transfer to Arabsat, where it became Arabsat D1.

Then in 1994, Otto seized the opportunity created by rising conflict in the Balkans and Middle East  to found Spacelink International.  Spacelink provided the DoD with essential commercial satellite communications services.  The company specialized in supporting US and coalition warfighters.  At that time, the idea of using commercial satellite capacity for military operations was new, and Spacelink became the first private company to operate an extension of the Defense Information Systems Network.  To meet the fast-growing need of the deployed warfighter, the company won international carrier licenses in European countries, becoming one of the first private satellite service providers in Germany.

In 2001, Spacelink along with two other companies won the largest small-business contract ever to be awarded in the history of the DoD to provide comprehensive commercial satellite communications in support of the US Government. As a technologist and entrepreneur, Otto greatly expanded the opportunities available to the satellite business in service to the nation.