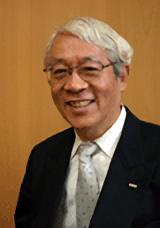 Dr. Yasuo Hirata has made major contributions to the development of digital mobile satellite communications systems and associated technologies during a 40-year career with Japan's largest international communications carrier. Starting with Kokusai Denshin Denwa in 1967 as an R&D engineer, he rose to become a member of the Board and senior vice president of KDDI in 2001 before accepting a position as chairman of KDDI's R&D organization.

Dr. Hirata designed the overall digital satellite communications system for maritime use and verified the system through field trials, overcoming many technical hurdles in the process. The INMARSAT Standard-B system, based upon Dr. Hirata's design, is now deployed throughout the world and thousands of Standard-B terminals are in operation today. He was also responsible for the design of an enhanced forward-error-correction system, called punctured FEC, which significantly improved power and frequency efficiency while maintaining high coding gain and simplifying hardware development. The high performance of punctured FEC led to its adoption by both terrestrial and satellite carriers, including Intelsat.

While pioneering in technology, Dr. Hirata also devoted his energies to technical standardization. He was a vice chairperson of the ITU-R Study Group 8, covering mobile communications, from 1985 to 1997. He also served as chairman of IWP 8/7, IWP 8/14 and Working Party 8D of SG 8 for over twelve years in order to support the advance of mobile satellite communications. In Japan, he chaired the Mobile Service Expert Committee of the Telecommunications Technology Council for the Ministry of Post and Telecommunications, and served as vice chairman of the FPLMTS Study Committee of the Association of Radio Industries and Business. Dr. Hirata has also received key awards for his research in telecommunications from both the IEEE and the American Institute of Aeronautics and Astronautics.