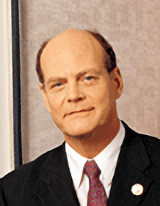 William “Mac” Evans’ name has become synonymous with the space program in Canada. A career public servant, he provided vision in planning and implementing Canada’s space plans for many decades. Mr. Evans began his career at the Canadian Defence Research Establishment in Ottawa in 1967, which two years later became the Communications Research Centre. As Mission Director for the Communications Technology Satellite (CTS) Program he oversaw the development and launch in 1976 of the CTS Hermes satellite in partnership with NASA. This was the most powerful communications satellite at that time and opened a new era in satellite communications by demonstrating advanced Ku band technologies and applications, particularly broadcast - an achievement that won an Emmy Award.

In 1979, Mr. Evans joined the Ministry of State for Science and Technology where he developed Canada’s space policies and plans. In 1986, he led the negotiation of the arrangement with NASA for Canada's participation in the International Space Station Program. He also oversaw the development of Canada's first Space Plan which resulted in the creation of the Canadian Space Agency in 1989, which he joined as Vice President. Throughout this period Mr. Evans also played key roles in Canada’s Radarsat and Astronaut Program’s.

Between 1992 and 1994, Mr. Evans was President and CEO of a not-for-profit corporation that developed an innovative model of cooperation among corporations, governments and universities for collaborative research into intelligent systems and robotics. In November 1994, Mr. Evans was appointed President of the Canadian Space Agency a position he held until November 2001. As President he provided leadership in gaining government approval for Canada’s third Long Term Space Plan and many noteworthy initiatives. The first major program under this plan is in the field of satellite communications research and is known as the Payload Flight Demonstration Program. This program involves a unique private-public partnership formed to develop and launch Canadian multimedia payload technology. This will be accomplished on Telesat’s Anik F2 which will be launched in 2003. This will be among the first Ka Band satellites to serve North America and an important advancement in the telecommunications infrastructure for Canada’s rural and remote communities.