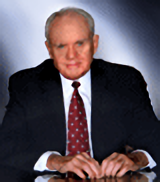 In the course of his four-decade career, Dr. Curtin has had a major influence on the industry. While at COMSAT Laboratories’ Spacecraft Laboratory he was the driving force in the development of high-power solar cells and the more powerful Black cell that, known as the COMSAT cell, became the industry standard for 20 years. In another area, his  team led the development of a new industry-wide electrical welding technique that substantially extended the life of solar arrays and the satellites equipped with them. As a consultant to the League of Arab States under a COMSAT contract, he assisted them in developing the first ARABSAT satellites through an international program, unique at the time, involving a French prime contractor, an American subcontractor, a Japanese TT&C contractor and two different launch vehicles including the Shuttle. In 1988, he joined Orion as head of engineering and led the ground-up development of this commercial satellite system. When Orion was acquired by Loral, Dr. Curtin was appointed General Manager and later COO of XTAR, LLC, which now owns and operates one satellite and a payload on a second satellite providing X-band capacity to US and allied government customers on a commercial basis. XTAR won a 2006 SSPI Industry Innovator Award.

Dr. Curtin has also been tireless in his efforts to ensure that young engineers and scientists have opportunities for personal and professional development, whether through technical presentations to their peers or face-to-face interactions with management. He has been a mentor across the satellite communications community throughout his career and has combined technical competence with business sense to provide younger professionals with the insights and encouragement they need to grow in their work. Dr. Curtin has authored over thirty publications and co-authored an article on communications satellites in the 10th Edition of the McGraw Hill Encyclopedia of Science and Technology. He is an AIAA Fellow and in 2006 was honored with the prestigious AIAA Aerospace Communications Award.