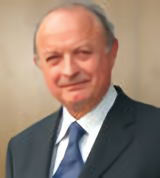 Chairman of the Board of Eutelsat Communications

Mr. Berretta joined Eutelsat in September 1990 as its first Commercial Director, with a mission to develop the market for telecommunications services.  He was appointed Director General in 1998 and successfully led the transformation of the assets and activities of the international treaty organization into a private company and then, in December 2005, into a public company quoted on the Paris Bourse, with a market capitalization of €6 billion.

Under his leadership, Eutelsat created the HOTBIRD neighborhood, and became a major provider of video services that broadcasts more than 3,700 TV channels.  These developments, and geographic expansion into Eastern Europe, Africa and the Middle East and North America, have produced an unbroken record of growth and profitability.  To support that growth Mr. Berretta has driven a program of sustained investment in new satellites, which have included technological innovations of overall benefit to the competitiveness and performance of space industry, including the acquisition of over 40 communications satellites and related launch services.