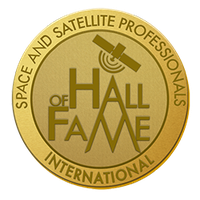 The Space & Satellite Hall of Fame recognizes the invaluable contributions of the visionaries who transform life on planet Earth for the better through space and satellite technology. Members of the Hall of Fame are recognized pioneers in satellite communications, earth observation, launch services, spacecraft technologies and applications, in-space operations, space law, space education and space science. They include Frank DiBello of Space Florida, Professor Bob Twiggs of Morehead State University, Steve Spengler of Intelsat and the three co-founders of Planet, Will Marshall, Robbie Schingler and Chris Boshuizen, as well as pioneers like Dr. John Pierce, Eddy Hartenstein, Dr. Gladys West, Rene Anselmo and Dr. Harold Rosen.

“Induction into the Space & Satelite Hall of Fame is the annual opportunity for SSPI’s global membership to reflect on the leaders who have made transformative contributions to our industry and, through it, to the world. The Hall of Fame is about more than business success or technology innovation: it is people who have given the industry’s innovation capacity a major boost and thereby accelerated economic growth, quality of life, peace, health, safety and sustainability.”