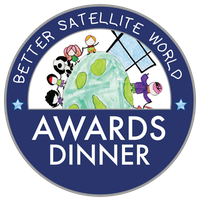 (17 November 2016 – New York City) - The Society of Satellite Professionals International (SSPI) announced today the four recipients of the second annual Better Satellite World Awards, which honor established companies and disruptive innovators for making our world a more prosperous, healthier, better-educated, more sustainable and inclusive home for all humankind. Selected by an international jury for their achievements were: DigitalGlobe, Disaster Tech Lab supported by Globalstar, Global VSAT Forum and Outernet. The recipients will be honored at the second Better Satellite World Awards Dinner on 5 December at London’s prestigious One Whitehall Place.

“Satellite is the world’s invisible but indispensable technology,” said executive director Robert Bell, “and our awards honor both for-profit companies and nonprofit organizations for using satellite in ways that make our world a better place. Our awards dinner in London gives us the chance to salute organizations that are quietly having a global impact.”

According to SSPI, recipients for the Better Satellite World Awards were evaluated in four categories. These were global or regional impact; distribution of knowledge for the improvement of living standards; governance and commerce; and communication and humanity.

The selection of the recipients for the Better Satellite World Awards was made by an international jury consisting of members of the SSPI Satellite Hall of Fame and distinguished industry professionals. The Better Satellite World Awards Dinner in London is produced by SSPI and its UK and Isle of Man Chapters, with the support of international law firm Milbank as well as Globecomm, Arianespace, ManSat and Newtec.

DigitalGlobe
DigitalGlobe is the world’s leading provider of high-resolution Earth imagery, data, and analysis. The company is a trusted partner of dozens of industries and communities worldwide – from environmental monitoring and mapmaking, to defense and intelligence, to urban planning and public safety. DigitalGlobe has also become a leader in providing humanitarian aid by supplying local, national, and international authorities and media with imagery and information products that support response and recovery activities in the aftermath of earthquakes, floods, hurricanes, and other natural disasters.

In a recent humanitarian victory, DigitalGlobe enabled the Associated Press to expose a slave fishing operation in Papua New Guinea. The company supplied the AP with high-accuracy, high-resolution imagery that only DigitalGlobe satellites can collect, which showed the slave fishing operation in the act and spurred a myriad of positive outcomes. The Seafood from Slaves investigation led to a series of arrests, the dismantling of a slaving operation, the freeing of more than 2,000 slaves, and a change to U.S. law that had previously allowed slave-produced goods to be sold in the United States. For its reporting on the issue, the AP won the 2016 Pulitzer Prize for Public Service. Watch how DigitalGlobe contributed to the investigation.

Disaster Tech Lab, supported by Globalstar
Disaster Tech Lab (DTL) is a volunteer-based organization that provides internet access to reconnect disconnected communities in disaster zones across the globe. Established in 2010 after the devastating earthquake in Haiti, the organization has grown to over 200 volunteers in eleven countries. Since its founding, DTL has deployed teams to almost every major disaster area across the globe. Disaster Tech Lab makes emergency communications possible in areas where critical infrastructure has been lost, providing reliable satellite technology to NGOs aiding people in crisis. Globalstar provides DTL teams around the world with satellite phones, satellite hotspots, and satellite-enabled tracking and safety devices to enable them to deliver this vital support.

Over the last two years, Disaster Tech Lab has provided aid to Europe in organizing and dealing with the migrant and refugee crisis. DTL provided satellite communications to allow coordination and management of resources within the refugee camps in Greece and also gave migrants the ability to contact their families back home via Globalstar satellite phones. Disaster Tech Lab also provided emergency communications during the earthquake in Italy in August 2016, equipping the Italian Red Cross with satellite communications tools. DTL assisted NGOs and local authorities during another earthquake in 2016, this one along the eastern coast of Ecuador. During the devastating floods in Louisiana, DTL helped install communications networks to support individuals, communities, and NGOs throughout the state. Lastly the organization used Globalstar hardware & services to provide communication services to medical teams deployed in Haiti following Hurricane Matthew.

Global VSAT Forum
Since 1998, the Global VSAT Forum has provided a platform for satellite regulatory issues and professional training in VSAT technologies for organizations around the world. In addition to promoting market liberalization, licensing reform and spectrum access, GVF has established an online training and certification program for VSAT terminal installers and operators, which has enrolled more than 13,000 professionals. GVF training – developed by the association’s partner SatProf and adopted by the world’s leading satellite communications service providers – equips installers and operators with skills they would not otherwise have and, through their strengthened qualifications, improves the quality of VSAT operations, which promotes continued growth in VSAT applications around the world.

GVF has also worked for nearly 20 years to establish a more effective and sustainable paradigm for global disaster preparedness. In coordination with its partners throughout the disaster-response community – including the United Nations Agencies, humanitarian organizations, militaries, national administrations, inter-governmental groups, and others – GVF has facilitated their disaster preparedness and response efforts by training and certifying first responders, identifying qualified local technicians, coordinating satellite industry support, and educating governments on regulatory approaches that enable the use of ICT systems to save lives.

Outernet
Syed Karim, the founder of Outernet, describes it as “a universal information service available to all of humanity.” Founded in 2014 as a private company headquartered in Chicago, Outernet now provides a global data delivery service over three Inmarsat I4 global beams. The company provides a content delivery service which focuses on making the most useful knowledge from the Internet available to those in areas with no connectivity. Syed Karim conveyed this vision to the world as a speaker at TedGlobal 2014.

In many places around the globe, Internet connectivity is prohibitively expensive, sometimes costing as much as ten times the average monthly income. Outernet creates offline versions of knowledge found on the web and broadcasts it to people without access to the Internet. The company currently operates a low bitrate global broadcast, which will expand over time to include the delivery of digital curricula and educational videos.

About the Better Satellite World Campaign
Working with partner associations and dozens of supporting companies around the world, the Society of Satellite Professionals International’s Better Satellite World campaign (www.bettersatelliteworld.com) is changing the global conversation about satellites and their influence on the economy, business and societies everywhere. The campaign was launched at SATELLITE 2015 and has since published a series of stories and videos that dramatize the immense contributions of the “invisible infrastructure” of satellite to life on Earth, which are widely shared by individuals, companies and the media. More information on the Better Satellite World campaign is available at www.bettersatelliteworld.com.

About SSPI
Founded in 1983, the Society of Satellite Professionals International (www.sspi.org) is on a mission to make the satellite industry one of the world’s best at attracting and engaging the talent that powers innovation.  With more than 4,000 members in +40 nations, it is the largest satellite industry association in the world. It delivers on its mission through a portfolio of programs: