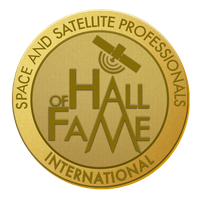 “This year’s inductees represent the most diverse group of individuals to ever enter the industry’s Hall of Fame,” said executive director Robert Bell. “They include a NASA official who opened the agency to unprecedented commercial partnerships, an entrepreneur with decades of technical innovation in ground segment to his name, a renowned journalist and a mathematician whose work made possible today’s satellite navigation systems.”

The latest members of the Space & Satellite Hall of Fame will be inducted during the 2021 Hall of Fame Celebration virtual ceremony on March 23. The inductees were selected by SSPI’s Board of Directors under the leadership of SSPI Chair Thomas Van Den Driessche, President of the Executive Strategy Board and CCO of ST Engineering iDirect, and SSPI President Nicole Robinson, CEO of URSA Space Systems.

Peter B. de Selding delivered more than 20 years of incisive coverage of the commercial space and satellite industry as Paris bureau chief of SpaceNews before co-founding SpaceIntelReport and becoming Chief Editor. His reporting has broken many major stories in the industry and never hesitated to tackle controversies, reveal conflicts of interest and hold business leaders accountable for their decisions.

Kathy Lueders has spent her career leading efforts at NASA to integrate commercial launch into NASA's human space exploration mission. From her service as Commercial Orbital Transportation Services Integration Manager to her current appointment as Associate Administrator for Human Exploration, she has worked to bring critical commercial technology, practices and cost savings to NASA. Most recently, Kathy spent seven years working with SpaceX, Northrop Grumman and Boeing to bring about commercial resupply missions to the International Space Station and make NASA's first venture into commercial human spaceflight possible with the SpaceX Crew-1 flight in November of 2020.

Jim Oliver is an inventor and entrepreneur with a proven record of achievement in ground segment technology. He has made major contributions to freeing satellite ground systems from fixed locations throughout his career, from his work at SatCom Technologies--where he led the introduction of innovative technologies for fixed and truck-mounted antennas--to the creation at AvL of high-accuracy pointing technologies for small portable antennas for commercial and military use. Jim's technological contributions have greatly expanded the applications for satellite communications in ways that save lives and expand opportunities for millions.

Dr. Gladys West served as a mathematician at the Naval Proving Ground (now the Naval Surface Warfare Center) in Dahlgren, VA for 42 years before retiring in 1998. From the mid-1970s to 1980s, she worked as Project Manager for the Seasat radar altimetry project, which made pioneering use of an IBM 7030 computer to provide calculations for an accurate geodetic Earth model. This model became a critical building block for the GPS satellite orbital plan and the immense range of benefits that GPS has delivered to humanity since then.

Full profiles of the 2021 inductees to the Space & Satellite Hall of Fame will be available shortly on SSPI’s website.